I haven't anything to contribute to this 60th anniversary of the funeral of King George the 6th other than my personal memory of those bleak and solemn days.
Mourning was different then, a more restrained and private  matter than it is today. But King George had earned the affection and respect of his people through the traumatic events of his short reign and the nation truly grieved and, I remember, many wept at his untimely passing.
Thousands of people lined up in the bitterly cold and wet weather to attend the four day Lying in State
in Westminster Abbey and thousands also camped out over-night, all along the the route from the Abbey to Paddington Station so that they could witness the last procession of their dearly loved King. I was privileged to watch from the sheltered balcony of an old mansion overlooking Park Lane, where I was working at that time.
My shards of memory are of the bleak grey sky and the leafless winter trees that enhanced the sadness and solemnity of the occasion, the slow measured pace of the heart aching music and the marching ranks, the Naval ratings who pulled the gun carriage and the four royal dukes, Windsor, Gloucester,Edinburgh and Kent, walking behind it, and the sadness that encompassed us all on that balcony. 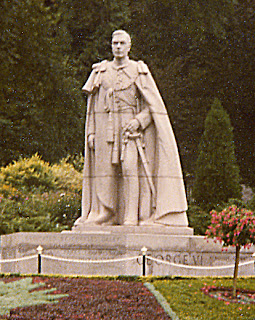 This statue of King George in the formal gardens at Niagara Falls, Ontario, has a very simple inscription.